There are 397 companies in the recent YC 2022 Winter batch. Which ones should you invest in?

Suppose a seed investor’s entire worldview and investment framework can be distilled into how they uniquely sort this large collection of startups by target portfolio weights. To sort the list, the investor has to perform at least 396 comparisons (in the best possible case), but O(N log2 N) comparisons in the worst case, which sums up to about 3428 bits provided by human judgement. That’s one expensive sort!

Can we shrink our estimate of the upper bound of the Kolmogorov complexity of a seed investor? To investigate this, I made a neural network, YCRank, trained it on a handful of hand-labeled pairwise comparisons, and then used the learned comparator to sort the companies in the most recent W’22 batch.

Disclaimer: Please don’t take it personally if your company ranks low on this list, this is more of a proof-of-concept of how to train models to reflect one person’s opinions. The ordering deliberately ignores a lot of things, and by construction does not consider important analyses like product-market fit, founding team strength, and technological edge. The current YC Rank model predicts ordering from a miniscule amount of context. You can take solace in that I’m not a particularly great investor - if you invert this list you might actually do quite well.

YCRank takes as an the input natural language description of a company. Here is what the raw JSON metadata for each company on https://www.ycombinator.com/companies looks like:

YCRank examines abbreviated descriptions like the one below to predict a logit score, which is then used to sort against other companies.

Carefully designing the dataset with the right choice of train/test split is 80-90% of the work in building a good ML model. I started by comparing a subset of companies from np.random.choice(393, size=200, replace=False) to a randomly chosen company from np.random.choice(393, size=1, replace=True) (an extra 4 companies got added after Demo day). I then split this into a training set of 155 examples and a test set of 48 examples. This means that at test time, the model is comparing unseen pairs of companies. Most of the companies it will have seen in at least one example, but some companies will never be seen at all.

To make the model easier to debug, I biased my ranking towards what was “harder to execute” on, especially in scenarios where I felt both companies were equally uninteresting. This is not how I would actually invest as an angel, but rather just makes it easier to debug whether the model is capable of picking up on this pattern.

I also tended to rank favorably companies that were already making monthly recurring revenue with double-digit growth rates. There are other ways to rank pairs of companies - one could imagine a variety of prediction heads that rank by “founder ambition”, “high chance of complete failure”, “atoms over bits”, “probability of being acquihired”, “socially good” etc.

The model is a modified RobertaClassificationHead on top of RoBERTa embeddings. Because the number of training examples was fairly small I got a decent boost (+10% accuracy) tuning hyperparameters and employing a variety of regularization tricks.

Neural network have learned “hidden” representations with which you can use to cluster data. You can combine it with an active learning scheme to have the model “help you decide what to label next”. This means that you can quickly find the examples that your model tends to perform badly at, and then label those to make the errors go away.

The Tesla AutoPilot team employs a similar idea in their “data engine” flywheel to help them surface more examples that their vision system tends to performs less well on. As the model gets better, the embedding space also gets better at surfacing relevant “hard examples” by matching the semantic content of the images better.

Here is a cosine similarity matrix of the company embeddings, grouped together via a spectral decomposition for ease of visualization. On the left are the RoBERTa embeddings - you can see some faint block structure but all the NLP similarities are quite high (> 0.99). On the right are the spectral clustering of the hidden layer embeddings of the RobertaClassificationHead. Because this hidden layer is explicitly trained for the downstream “Eric rank prediction” task, it unsurprisingly separates better into more distinct clusters by cosine distance. 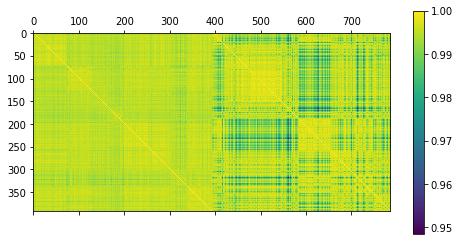 It’s not a big deal that the cosine similarities are close to each other, since we’ll use the relative ordering of scores to determine our active sampling scheme. A cursory examination suggests that the embedding is learning to group by sector. For example:

Using these embeddings, I wrote a very simple ML-assisted data labeling algorithm to help me find companies pairs that would correct mistakes in the test set, without actually adding the exact test pair into the dataset. I did this step twice, and each time added about 15 examples. After two iterations, a total of an additional 30 labels boosts the test accuracy from 81% to 91%! 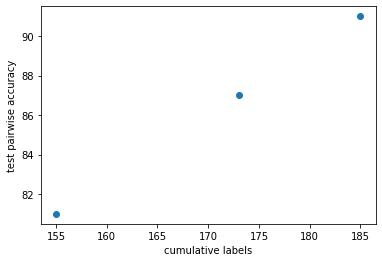 Satisfied with the test accuracy, I used YCRank to read all the YC pitches and sort them. Here they are, along with the predicted logit scores. The scores are not normalized in any way, so they are only useful for comparing one company to another.

Want to Try it Out?

This model could be helpful to people in a few ways.

It’s natural to wonder whether such machine learning models can eventually automate venture investment itself, but it’s a bit too early to say. Machine learning holds up a mirror to human behavior, knowledge, and sometimes, prejudice. Even if we had a perfect mirror of behavior, said behavior might not be the best one, and we have an opportunity to do better than just automate the status quo. Therefore, it’s practical to first use these ML models to help humans make decisions, before thinking about more ambitious automation goals.

If you’re interested in trying this model out, please reach out to eric@jang.tech for beta access. I intend to code up a proper website for people to train their own YCRank networks, but want to spend a few more days making sure there are no embarassing failure modes.